Published on Thursday, December 17, 2015
This article was tagged under: landscaping 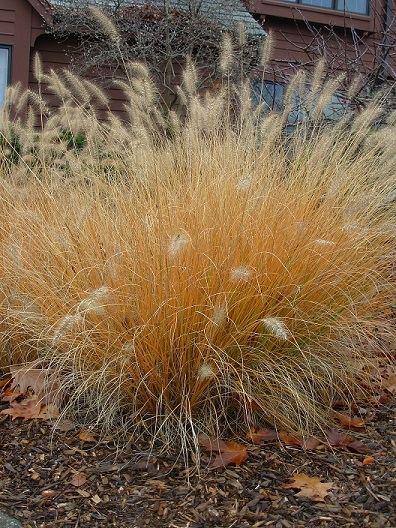 Many perennials are better left standing over the winter than cutting them down. There are several reasons for this. In addition to many of the perennials having attractive foliage and/or seed heads, they offer food resources for birds. Many birds find the seeds of perennials particularly tasty. The stems of perennials also offer a place for some birds to hide during the winter. With some marginally hardy perennials, leaving the stems up for the winter aids in overwintering. The foliage helps to insulate the crowns. Mums seem to benefit a great deal from this practice. Another reason to leave stems stand is that if the perennial is a late riser in the spring, the stems will help to mark the spot and prevent any accidental digging in the area that might harm the underground portions of the plant.
Cutting back perennials in the fall may be something you would want to do especially if you were bothered by foliage diseases. Removing the old foliage would be a positive in this case as it helps to reduce the amount of innoculum present to re-infest next year’s foliage. Removing foliage can also be one of pure aesthetics. Some gardeners like to see standing perennials in the winter and others don’t. When perennials are cut down, do so after they have gone dormant. This is usually after the plants have experienced several hard frosts. Cut the plants down to within 2-3 inches of the crown. Cutting too close can result in winter injury on some perennials due to the fact that the buds for next year’s growth are right at the surface or higher and not below the soil line.