The Benefit of Bats in the Landscaping!

Published on Tuesday, January 14, 2014
This article was tagged under: landscaping 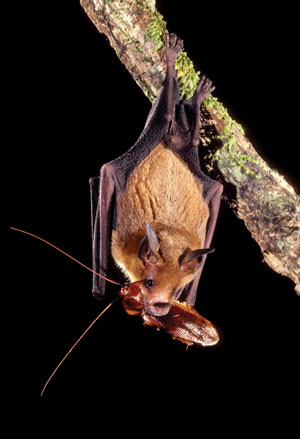 In a blog article I wrote a few months ago I sang the praises of bees, and why they are so important within the ecosystem, why you should want them in your yard, and what you can do to attract them to your garden for pollination.  Did you know that bats are important pollinators too? And THE BEST organic pesticide there is?  It’s true! Need some convincing?  Here it goes.

For starters, bats are helpful, and not as bad as some make them out to be.  They have got an undeserved reputation for being gross.  Bats are the only mammals that can truly fly- their wings are actually hands- that have adapted for flight.  They are very flexible, and able to move independently, and, as mammals, they actually spend a great deal of time cleaning their fur!  Bats have no more incidences of rabies than other mammals, in fact, less than 1% of bats are said to be infected with rabies, and transmission from bats accounts for 1 death per year in the US.  (A statistic much less than that of dog bites and lightning strikes.  Weary of Vampire bats? Don’t be! Of the 1200+ species of bats in the world, there are only 3 that feed on blood of livestock (by licking, not sucking), and all 3 types live in Latin America.  No worries!

The pre-dominant role of bats in the echo-system, is that of insect predators and plant pollinators.  In one night, a single bat can eat 3,000-7,000 insects, including mosquitoes.  Fruit bats have very good eyesight, while some bats do not…they make up for their poor eyesight by using echolocation.  This is a signal sent by the bat that allows it to find small areas, where there may be a lot of insects to feed on.

Like birds, some bats play a critical role in spreading tree seeds- over 500 plant species rely on bats to do their pollination, including some of mango, guava, agave, banana, and cocoa.  In return- the bats feed on the fruit off these plants!  Plants that are pollinated by bats have pale nocturnal flowers.  If you’d like to attract bats to your area- try planting some perennials such as Evening Primrose, Moon Flower, Cleome, Phlox, and Nicotiana.  In return, the bats will eat all those annoying mosquitoes in your yard!
Bat populations are declining in North America due to disease (White Nose Syndrome), loss of habitat, and starvation.  Increased use of pesticides may mean that bats go hungry (lack of insects).  Ironically, bats can reduce the need for pesticides because of the large amount of insects they eat.
To create a bat friendly yard, you must supply a place for them to roost.  Bats do not build nests, instead they look for warm, dark, dry, narrow crevices to roost in.  Many like hollow logs, or caves.  You can help by installing a bat house in your yard.  Bats that are attracted to houses prefer to be near open areas, and the house should be installed at least 12ft in the air.  Hanging upside down, allows bats to roost and raise their young in areas that no other animal can utilize for those purposes.

So you see, bats are not as creepy as you thought, they are actually very beneficial.  Please consider adding bats to your landscape!

Information used in this article has been provided by The Bat Conservation Trust and University of Illinois Extension website.