Goldenrod Gets a Bad Rap!

Published on Thursday, October 03, 2013
This article was tagged under: landscaping, Lawn Care 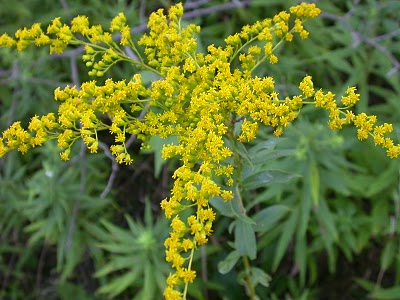 It is mid-September.  Are your eyes itchy?  Is your nose runny? Do you sneeze worse when you step outside?  Chances are, you are suffering from hay fever and the culprit is ragweed- NOT Goldenrod.  Goldenrod – that tall late summer/early fall blooming perennial with yellow flowers- often is unfairly blamed for causing hay fever.  That’s too bad, because goldenrod is a wonderful addition to the back of any perennial border.  So, why does goldenrod get such a bad rep?  Well, both ragweed and goldenrod bloom at the same time, and when people see the masses of bright golden flowers, they automatically assume that its  pollen is the source of their irritations.   Actually, goldenrod pollen is too heavy and sticky to be blown far from the flowers, which is why it is so brightly colored.  Goldenrod must need a way to attract insects who are its main pollinators.

Ragweed has small, fairly unremarkable flowers that unleash abundant amounts of pollen freely into the wind.  The only way you and I know that ragweed is blooming at all is through our allergic reactions to the pollen.  Thousands of tiny flowers on each plant result in the release of approximately one billion grains of pollen.  This happens usually during the mid-morning hours as dew dries and humidity decrease.  It is estimated that up to 1 million tons of ragweed pollen is produced each year in North America alone.

Almost every pollinating insect can be found on goldenrod in autumn.  Blooming goldenrod provides one of the last big blooming shows of the year.  Did you know the leaves are edible?  Native Americans chewed on the leaves to help relieve sore throats and chewed on the roots to relieve toothaches.  Teas were made and the seeds were eaten.  Whether you use it as a food or medicinal source, or simply to enhance your landscape bed, goldenrod is not one to blame on for your late summer/fall allergies.